The Best Way To Experience The Haiku Stairs

The Haiku Stairs is one of the most popular hikes on Oahu for many reasons – the scenery, the amazing view from the top, and of course the thrill of it being illegal. If caught hiking the stairs, you can be fined $1,000 and be assigned community service. You won’t be allowed to leave the island until you’ve completed it. Of course, there’s worse places to be stranded than Hawaii! But is it worth the risk? In my opinion…yes. But considering I’ve done it and gotten away with it, that’s easy for me to say. For reference, in one month, 631 people were turned away from the hike, and only 9 were actually given citations. The odds are in your favor.

There are tons of other posts out there about how to start the stairs, evading the guard, and all that jazz. This is not one of those. In all honesty, I have no knowledge or authority on how to start the Haiku Stairs. But in my opinion, the route I’m proposing is 10 times better than simply going up and down the stairs, so stick around!

What You Should Bring

– One of those giant 1.5L bottles of water in every single ABC Store

– Bug spray so you don’t get eaten alive

– Baby Wipes to clean off with (you’ll see why later)

– A beer to enjoy at the top

Many people like to do the stairs to reach the top as a viewpoint for the sunrise, or go early to sneak past the security officer under the cover of darkness. However, there are always groups of people coming and going throughout the day so it depends on your preference and purpose for going. We originally attempted to get in through the adjacent neighborhood, but as we were walking, we got stopped by an intimidating security guard who turned us away. Later, we were told by others that they just kept trying until they got past the guard, so I guess we just weren’t hardcore enough! Next, we tried driving up to the other entry points, but we got tailed by security until we left.

Finally, we decided to change our plans and hike up the backside, which is legal. First, we had to drive to the trailhead of the Moanalua Valley Trail, so we didn’t get hiking until around 4:30. If you do this route, I don’t recommend starting very long before sunrise – hiking that ridge in the dark would be incredibly risky.

The beginning of the trail was deceptively easy, overwhelmingly beautiful, and exceedingly…muddy. As much as I love hiking in sandals whenever possible, this is definitely not one of those hikes. Eventually, you’ll get to the ridge which is where the real fun begins. Hiking up the ridge takes about 4 hours with an elevation gain just over 3,000 feet, and 4.5 miles to the top. Once you’re on the ridge, don’t rush yourself. One wrong step, and you might find yourself tumbling down the side of the mountain! Luckily, there are lots of trees and surprisingly strong shrubbery to grab onto if that happens.

There were certain areas on the ridge where I ended up on my hands and almost my knees, just to get up a steep area. Expect everything below your knees to get muddy – and probably your hands too. Some parts of the hike have handy dandy ropes at your disposal to pull yourself up with, so expect to get a workout for your arms as well. 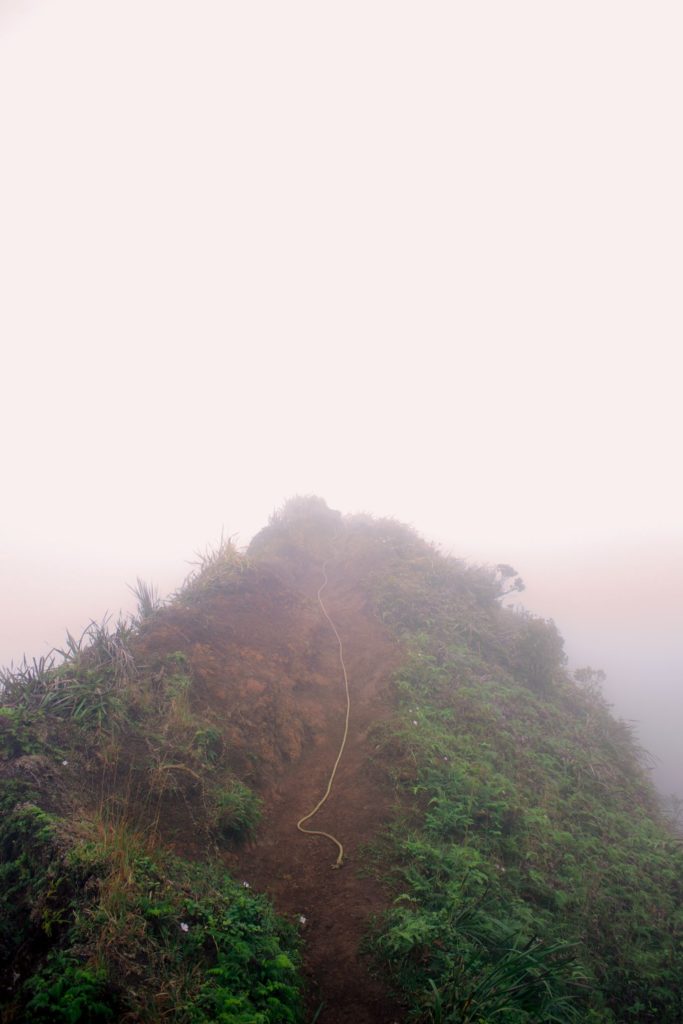 Arriving At The Top

The hike felt like it went on forever, especially because it was incredibly foggy when we went and we couldn’t really see the progress we were making. But once we made it to the top, it was so rewarding! I was renewed with fresh energy upon completing the most challenging hike I’ve ever done to date. The fog skewed our view, but it added a mysterious feel that I wouldn’t have known otherwise. All we had to do, was go down a few stairs to get past the clouds and see the view that was hidden by the fog. 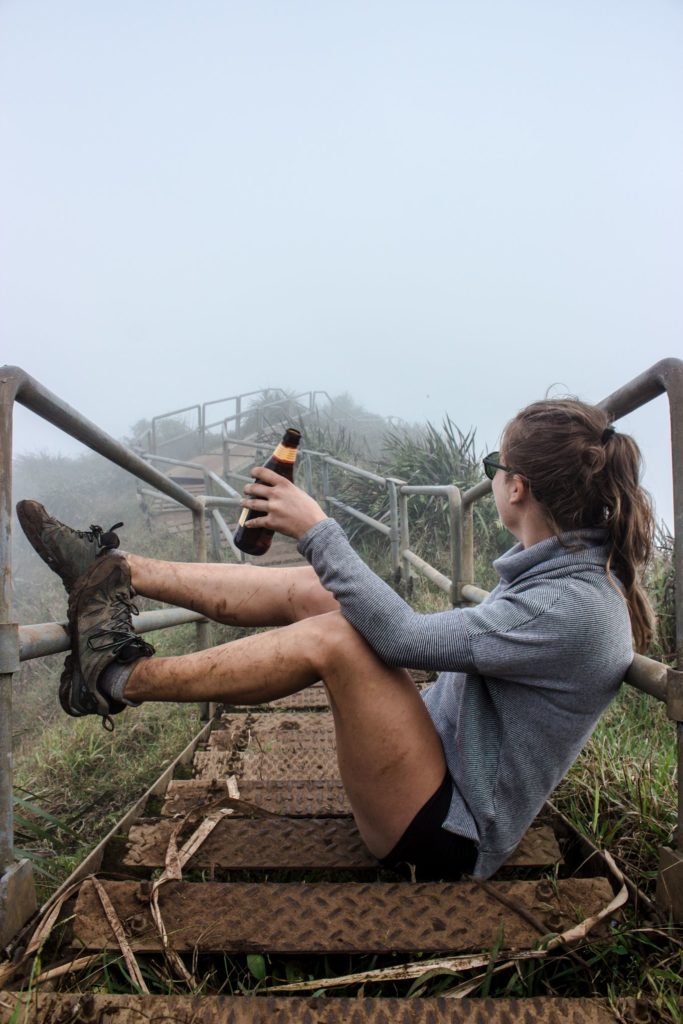 I’m not joking. Bring a beer! (But just one)

Descending Down The Stairs

We decided then and there to climb down the stairs and take an Uber back to our car. This swept a wave of relief over me, because I was not looking forward to scrambling down the muddy ridge. Chances of falling in the descent were much higher than they were going up. Plus, I still got to do the infamous stairs! The actual stairs were very sturdy, and definitely felt safer than the previous route we climbed up (how’s that for irony?). There were a few sections that were a bit damaged, but the metal didn’t feel like it was going anywhere.

Upon exiting through the infamous bamboo forest, we ended up in a residential area. We had previously called an Uber to have waiting so we would have a quick escape vehicle, but they wouldn’t take us because we were all too dirty. So we ordered a second Uber, and waited another 15 minutes to be told the same thing. Eventually, we convinced him to take just one of us back to our car, and the rest of us risked a walk out of the neighborhood. Not a single cop or security guard was seen. This is where having some sort of wipes will come in handy! If you need a quick getaway, be sure to wipe yourself down before summoning an Uber – you might not be as lucky as we were.

What Makes Hiking Up The Backside So Much Better?

Personally, I think hiking the full trail gives you a more satisfying experience due to the challenge. However, doing the Moanalua Trail is definitely not for everyone. You have to be willing to get dirty, and if you’re not in shape (like me!) it is crucial to have the right mindset to keep pushing on. The hike involves 4 hours of climbing up and down a slippery, but stunning mountain ridge. Pace yourself, drink lots of water (but not too much at once of course!) and you can make it. Hiking up the ridge trail, I felt like I was in an enchanted forest. Every time I looked out at the expanse of the jungle, I was blown away. There are sections where the trees form perfect archways over the trail, which is something you won’t get on the stairs. Both hikes offer something different, and doing the whole thing lets you experience it in it’s entirety! 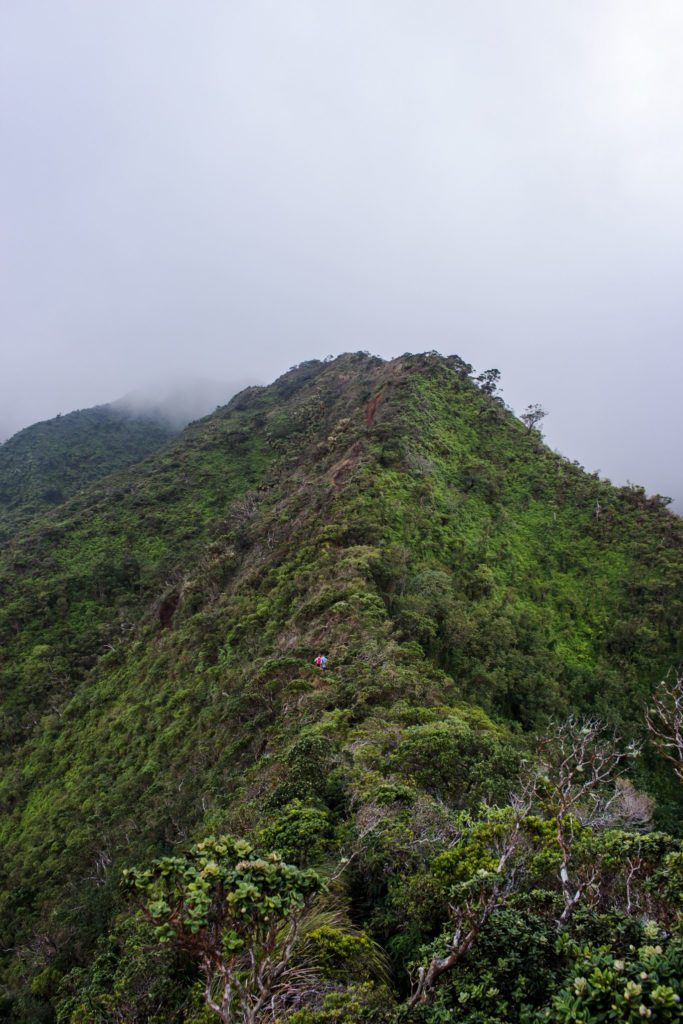 Have you ever done this infamous hike? If so, what was your experience like? Let me know!

Even though people do this hike all the time, it is still illegal. Being on the stairs at any time is grounds for citation. Do the stairs at your own risk!