Couchsurfing Confessions: One Cave, One Chicken.

When my time as an au pair in Italy came to an end, I made my way to Sheffield, England where I stayed with a friend for 2 months. While I was there, my primary goal was to work online and do what I could to build up my shrinking bank account. This made it a little difficult to go out much, mostly because the tram alone cost 4 pound per day which added up, so I typically just opted to work from the flat most of the time. However one day, I was  scrolling through couchsurfing  events and found one for a free expedition to explore a cave. Now I’ve gone on some awesome adventures because of couchsurfing, but this one was certainly unique.

Yooooo! This sounded bomb! Why the heck not? I contacted Andrew, the guy running it, and it turned out he was a professional caver and overall adventurer so the whole thing was pretty legit. As luck would have it, there was another attendee coming from my area, so I was even able to find someone to carpool with.

Upon arrival, Andrew conveniently forgot the helmets, so his partner and helper both left to retrieve them. Leaving four of us, Andrew, Emma, Nathan, and myself, to get to know each other. Andrew was middle aged and balding, but he had high spirits and cheeky humor. Emma was petite, yet heavily tattooed with a pixie cut to match. Along with her edgy appearance, she too had questionable humor and a quick wit. Nathan, who I carpooled with, was the most tame of the group. He was a recently graduated university student who had a more reserved personality and quiet sense of humor.

As we waited in the English countryside surrounded by rolling hills peppered with sheep, we quickly developed a rhythm – making fun of each other’s countries (in good fun), swapping travel stories, cracking a joke at Nathan for being a ginger, and overall banter. When, Emma made a jest about America, I challenged her as to why she was wearing a shirt with an American flag, and so on.

I could tell this would be a fun day.

At last, the helmets arrived and we headed into the cave which was named Giant’s Hole. Before entering, Andrew pulled out a beat up toy chicken and clipped it to my belt saying, “I make all beginners wear this on their first expedition.” With that, the journey began. Clearly, Andrew had been in that cave dozens of times before as he shared his knowledge about the makeup of the cave and the history behind different sections. 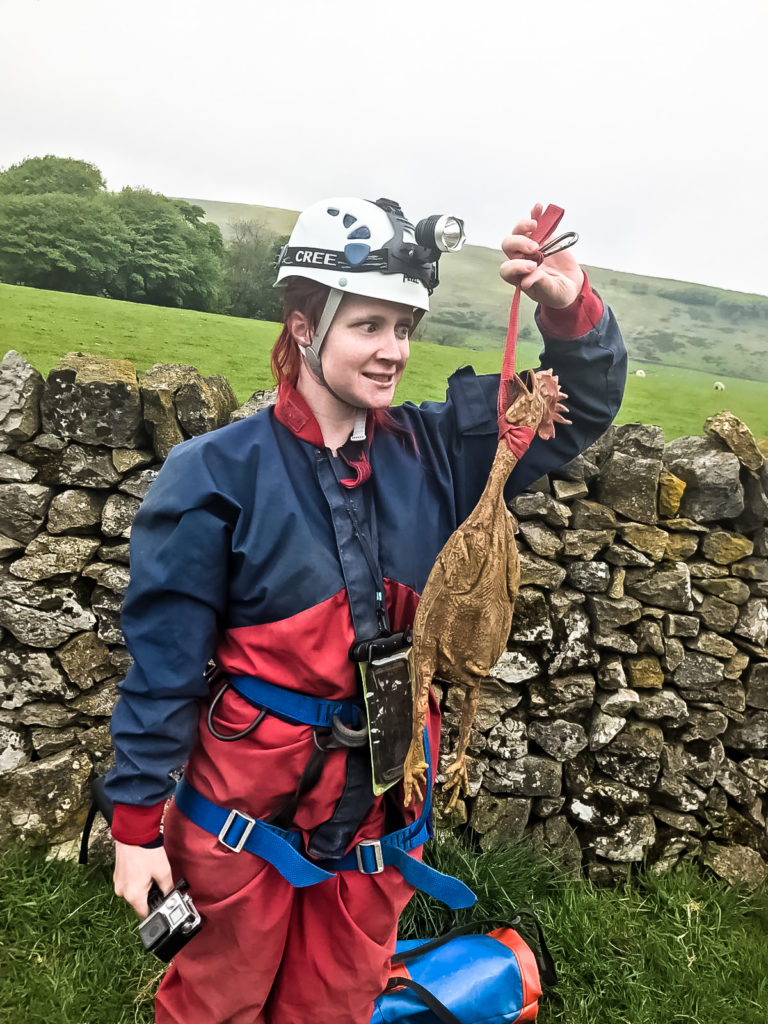 I wasn’t sure how to react to the chicken.

The entire thing was an active cave, meaning it’s still being formed. There was a small steady stream covering our pathway, ranging from one to six inches deep at times. Water dripped down the sides of the cave, making the grey stone appear like slimy clay until you touched its hard surface. The narrow pathway engulfed us as we ventured deeper and deeper into the earth, our path only revealed by the dim lights on our hats.

After about 40 minutes of slow exploration, we came to a wide pit in the ground, spanning about 10 feet across and about 30 feet deep. Andrew and his two assistants got to work setting up a thin rope ladder, only two inches wider than my hands, with metal rungs that grew cold in the cavernous climate. He tossed it out into the empty air and we watched as it gracefully unraveled into the abyss below.

Nathan and Emma descended first, and I followed eagerly behind after being clipped onto the safety rope. My clunky Doc Martens were barely thin enough to fit inside the rungs, making it difficult to go quickly, and my numb hands didn’t help the situation. The flimsy ladder swayed beneath my struggle, but I eventually made it safely to the bottom. We looked up in awe at what we had just climbed down – it wasn’t excessively deep, but the image of the water dripping down from the top of the hole as it cascaded over the ridges of the ancient rock was mesmerizing. 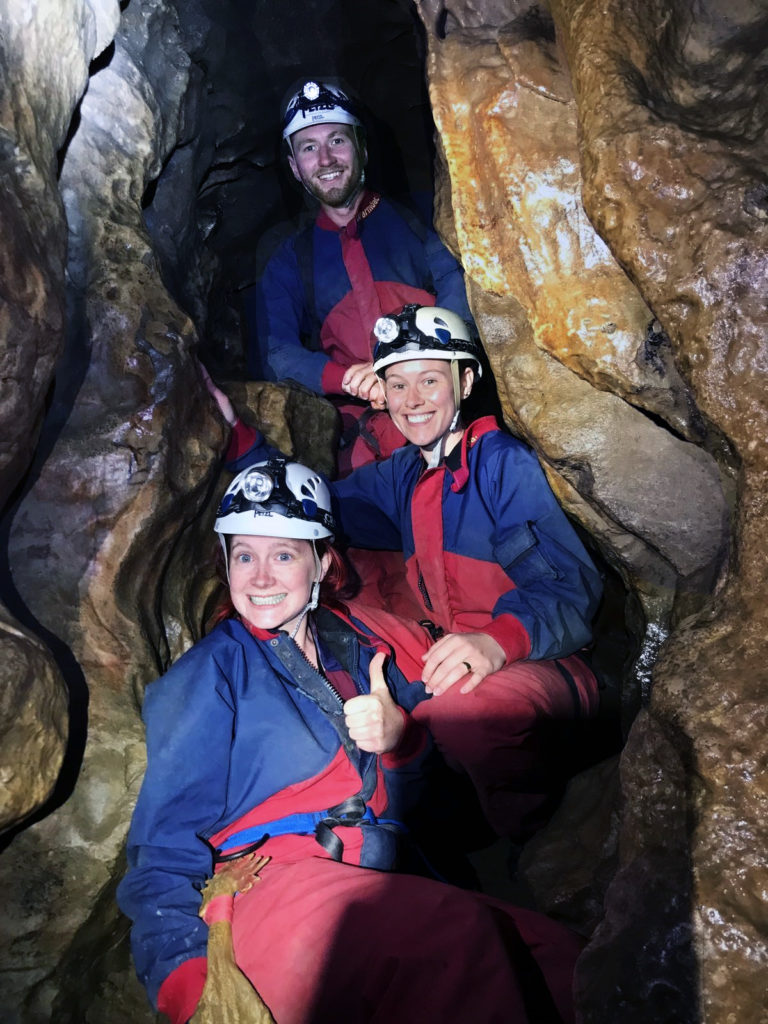 Nathan, Emma, and myself – cave squad!

At the bottom, there wasn’t too far for us to go. We shimmied through a slim passage in the rock – it was thinner than the other ones we had been in, and I had to contort myself into various Tetris shapes to squeeze through, which was entertaining.

After a few yards, it got too narrow to continue so we turned back and reunited with the main cave. We headed back up; most of the fun was in being able to use the flimsy yet reliable ladder. Our climb to the top was only accompanied by our drifting breath, revealed in the cold atmosphere by our headlights. Oh. And I had the chicken.

Sitting at the top waiting for Andrew and his team to pack up the ropes and ladder, I tried to warm my numbing hands. I get cold pretty easily, but my hands are the worst. The chilly environment mixed with the sensation of the ladder rungs was not a pleasant combination. Emma noticed what I was doing, and offered to help; I held out my freezing digits and she rubbed them with her surprisingly warm hands. “How the heck are your hands so warm!?” I exclaimed. She smiled knowingly. “I’m a mom.”

Once the gear was stowed away, we began our walk back to the exit. As we neared the entrance of the cave, the air grew crisper and light suddenly flooded in to greet us. Compared to the depths of the cave, the 60 degree weather felt like a perfect summer day. The humor continued on the walk back to the cars while I remained silent, soaking in the last few minutes of this unexpected couchsurfing excursion. 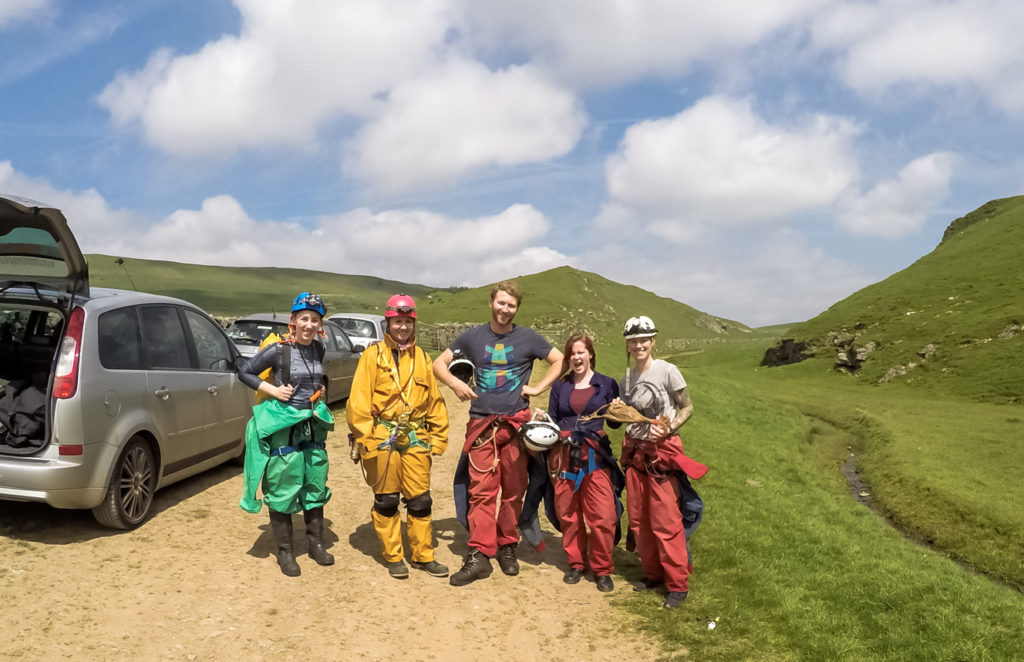 Everyone minus Andrew – he’s hiding from the FBI or something.